Pixar – The Art of Storytelling with Khan Academy – sponsored by Disney 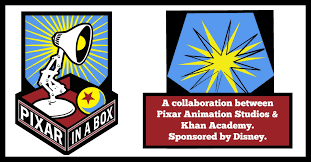 There are few organizations in the world that can claim more expertise when it comes to storytelling than Pixar. The Disney-owned animation studio is known for its ability to consistently create world-class movies with gripping narrative alongside stunning visuals. Now, Pixar is helping others learn the secrets of great storytelling ā for free, in partnership with online education provider Khan Academy.

The internet classes include videos, exercises and hands-on activities to guide learners from initial idea to final storyboard. It’s the third season of āPixar in a Boxā on Khan Academy, which first launched on the site in 2015.

Lessons are sourced from Pixar directors and story artists including Inside Out and Up director Pete Docter, Brave director Mark Andrews, Inside Out story artist Domee Shi, and Ratatouille animator Sanjay Patel.

The first lesson, available now, provides an introduction to storytelling as well as help for you to hone your initial creation of things like setting and character. Watch videos and be tasked with practical activities to complete.

Trainingmatchmaker.com hopes to hear of and share with aspiring learners even more Pixar lesson releases throughout 2017 and beyond.

Lesson 1: The Art of Story Telling
This topic is an exploration of the storytelling process at Pixar.

What makes a story great? What makes someone a good storyteller? Storytelling is something we all do naturally, starting at a young age, but thereās a difference between good storytelling and great storytelling. In this lesson youāll hear from Pixar directors and story artists about how they got their start and what stories inspire them, and youāll begin to think about what kinds of stories you might want to tell.

Characters are at the heart of every film Pixar makes; theyāre the individuals we follow on the journey of every story. But how does Pixar come up with those characters, make them more than just generic ideas, and really bring them to life? In this lesson youāll explore how character development drives the storytelling process at Pixar, and youāll start thinking about creating characters for your own stories.

Every story that is told has a foundation, or structure. For example, one of the most basic story structures is āit begins, something happens, and it ends.ā But a story’s structure can be complex, and if used well youāre not even aware of it. In this lesson youāll learn how Pixar structures their films, and youāll start laying the foundation for your own stories.

While telling almost any story involves words, characters and structure, making a film involves another aspect of storytelling that Pixar thinks a lot about: visual language. Visual language refers to how imagery is used to convey story ideas or meanings. Perspective, color, and shape can all be used to support a story by guiding the audience to see and feel certain things. In this lesson we introduce you to some basic principles of visual language, and youāll get to apply those principles to your own stories.

Making a movie requires an understanding of the principles and terminology of cinematography, like camera angles, editing, composition, and movement of the camera and characters. This is also known as Film Grammar, and like actual spoken grammar, it is a language used to tell stories in a visual way. Each scene, shot, and frame is considered and crafted using this language. In this lesson we explore the basic Film Grammar used in cinematography and how Pixar approaches its use in storytelling. You will also use these principles to plan shots for your own film.

Storyboarding is the act of telling a story through sequential frames using simple drawings; itās a quick way of working out all the elements of your story, from structure to composition, as you iterate and refine it. In this lesson we put everything together from the previous five lessons to demonstrate how Pixar uses storyboarding in their filmmaking process, and you will have the opportunity to try storyboarding the story youāve been working on throughout these lessons.

Get the Latest Updates

This website uses cookies to improve your experience while you navigate through the website. Out of these, the cookies that are categorized as necessary are stored on your browser as they are essential for the working of basic functionalities of the website. We also use third-party cookies that help us analyze and understand how you use this website. These cookies will be stored in your browser only with your consent. You also have the option to opt-out of these cookies. But opting out of some of these cookies may affect your browsing experience.
Necessary Always Enabled
Necessary cookies are absolutely essential for the website to function properly. This category only includes cookies that ensures basic functionalities and security features of the website. These cookies do not store any personal information.
Non-necessary
Any cookies that may not be particularly necessary for the website to function and is used specifically to collect user personal data via analytics, ads, other embedded contents are termed as non-necessary cookies. It is mandatory to procure user consent prior to running these cookies on your website.
SAVE & ACCEPT